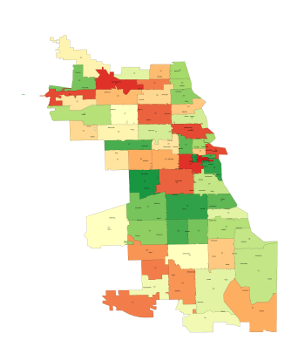 The structure of the city makes it difficult to evaluate population change simply by zip code.  Most people are more familiar with the 77 community areas and more than 200 loosely defined neighborhoods which are not clearly encompassed by a single zip code.  The communities and neighborhoods incorporated in the zip codes with the greatest changes in population were identified using maps from the City of Chicago’s Data Portal.

60604 is part of the Loop neighborhood, including the Historic Michigan Avenue Boulevard District and the South Loop.   This neighborhood has a good location, near the heart downtown, while offering new developments in close proximity to Grant Park and museums.  This location and the activities readily available may account for the large increase in 60604.

The large Near West Side community has a number of neighborhoods, including Greektown and the West Loop, which City data lists  as the main neighborhoods contained in 60661.  Recent years have seen gentrification in the West Loop, drawing shops, restaurants, and residents to the area, creating a large population influx in this zip code.

60623 encompasses two communities, North and South Lawndale.  Within each community is a single neighborhood of the same name, although South Lawndale is often referred to as Little Village.  North Lawndale has been among the city’s most dangerous and crime-ridden neighborhoods for decades and has historically seen population decreases as a result.  While not impossible, it seems unlikely that this neighborhood is responsible for the large population increase in 60623. It is more plausible that the southern part of 60623, South Lawndale, is seeing the large growth in population.  This area has become a stronghold for the Mexican American community and boasts a successful and growing shopping district of predominantly family-owned businesses.  Although it was greatly impacted by the Great Recession, seeing a decrease in residents from 2000-2010, the area seems to be rebounding as immigrants move to the area.  Little Village is likely the cause for the large growth in 60623.

60606 contains parts of the Loop and Near West Side communities, including the Fulton River District neighborhood.  It is not readily apparent why this zip code has seen a decrease in population, since both areas have seen an overall increase as a community.  The Fulton River District neighborhood has seen an increase in residential real estate in the last five years, so it may be that adjacent neighborhoods are attracting more people, preventing 60606 from growing like other parts of the Near West Side and Loop.

The Loop is also represented in 60602 and 60603.  Both zip codes encompass small areas of the Loop, with less than 2000 residents populating the neighborhood.  The small size of these zip codes may be creating more drastic percentage fluctuations with minor changes in population than some of the more densely populated neighborhoods.  Additionally these parts of the Loop are in the business district of Chicago, so development of housing may not be a priority for this area, which may be focusing on creating and maintaining offices and space for business instead.

Advantages to Moving During a Chicago Winter

Moving Out of State? Don’t Forget to do These 5 Things